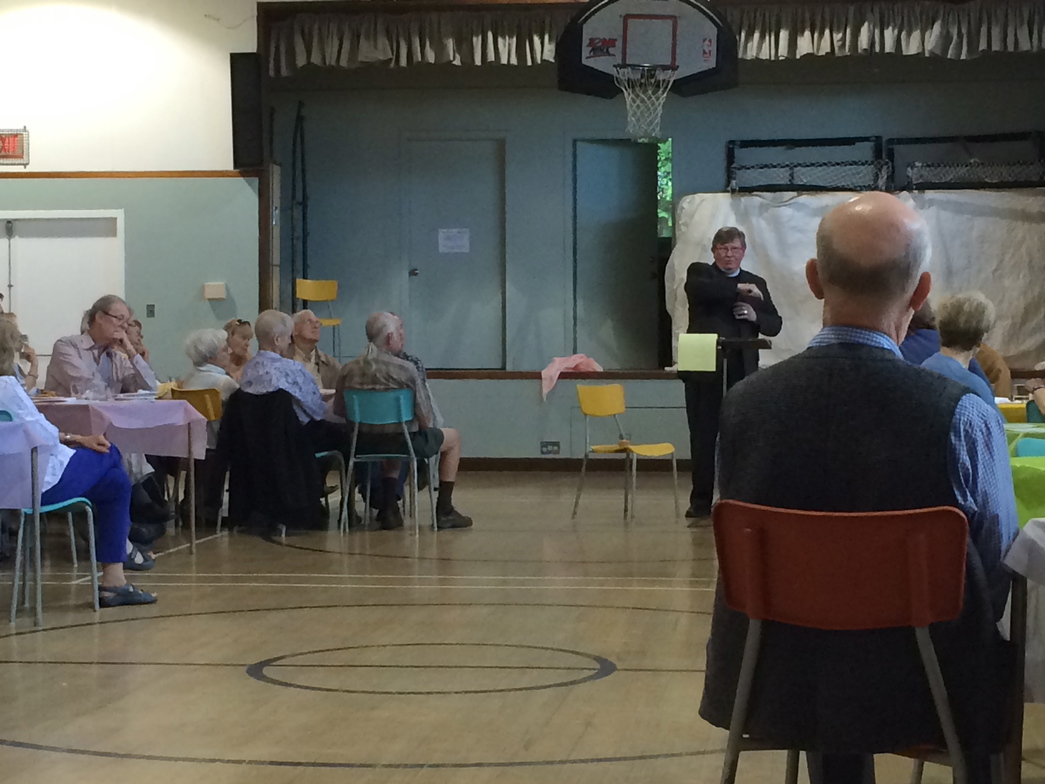 “Think of yourselves as pioneers,” urged the Rev’d Dr. Richard Leggett in his opening remarks to congregants from Gloria Dei Lutheran Church and St. Catherine’s, Capilano on Sunday, May 18.

Richard, who had presided at Gloria Dei church that morning, was speaking at a post-service luncheon attended by both congregations at St. Catherine’s church, which is located in Edgemont Village, just one kilometre up the hill from Gloria Dei. Last year, the two churches voted to develop a model for shared ministry in North Vancouver’s Capilano area, and Richard accepted their invitation to speak on the history and theology of the two denominations.

Although the listeners were urged to be pioneers, it soon became clear from Richard’s talk that many others have laid a trail to follow. The first Anglican-liturgy missionaries in India, for example, were Danish Lutherans, while Swedish Lutherans in long-ago Wisconsin were in turn served by Anglican priests. In more contemporary times, Richard, who is currently priest at St. Faith’s Anglican Church in Vancouver, noted that he himself has been involved in Lutheran-Anglican dialogue since his days in seminary in 1978.

The efforts of many culminated in the signing of the Waterloo Declaration of 2001, a document that Richard helped to author. He recalls being sequestered in a convent with a handful of other Lutherans and Anglicans, hammering out a draft while bishops from the two denominations gave feedback from the other end of a telephone line. The resulting document, which declares the Anglican and Lutheran Churches to be in full communion*, was promptly and enthusiastically endorsed by the National Convention of the Evangelical Lutheran Church in Canada and the General Synod of the Anglican Church of Canada. “In six years, we undid 450 years of institutional separation,” Richard remembered proudly.

Shared ministry at the level of the neighbourhood church has become increasingly common since then, through partnerships such as the sharing of clergy, joint programming or shared facilities. This range of possibilities is demonstrated by the number of Ecumenical Shared Ministries (ESMs) listed in the Waterloo Ministries Directory.

While there are, of course, differences between their denominational practices, Richard pointed out a number of commonalities between the two churches:

Richard also noted that both churches have a commitment to taking care of their neighbourhoods and an understanding of their “parish.” He described his own church as having 110 congregants, but 50,000 parishioners in the wider Vancouver community. He emphasized that those 110 congregants have responsibilities to the 50,000 parishioners, and that to forget that would be to engage in “the liturgical equivalent of a gated community.” Although he acknowledged that we sometimes need reminding of the fact, Richard said both Lutherans’ and Anglicans’ “primary value isn’t about our own enclosed worship space.”

Before opening the floor to questions, Richard encouraged St. Catherine’s and Gloria Dei to adopt the “Lund Principle,” a statement formulated by the World Council of Churches in 1952 that he only semi-jokingly suggested should be part of our baptismal covenant. It states that Christians should act together in all matters except those in which deep differences of conviction compel them to act separately.

Richard’s talk provided excellent groundwork for further discussions to take place between the two churches. The next stage of the conversation will happen at a June 7 Talk and Tapas evening, in which members of Gloria Dei and St. Catherine’s will share thoughts for joint programming and worship, thus providing guidance and feedback to the inter-church task force charged with making proposals for the future.

*The definition of Full Communion, as enunciated in the Waterloo Declaration:

"Full communion is understood as a relationship between two distinct churches or communions in which each maintains its own autonomy while recognizing the catholicity and apostolicity of the other, and believing the other to hold the essentials of the Christian faith. In such a relationship, communicant members of each church would be able freely to communicate at the altar of the other, and there would be freedom of ordained ministers to officiate sacramentally in either church. Specifically, in our context, we understand this to include transferability of members; mutual recognition and interchangeability of ministries; freedom to use each other's liturgies; freedom to participate in each other's ordinations and installations of clergy, including bishops; and structures for consultation to express, strengthen, and enable our common life, witness, and service, to the glory of God and the salvation of the world."