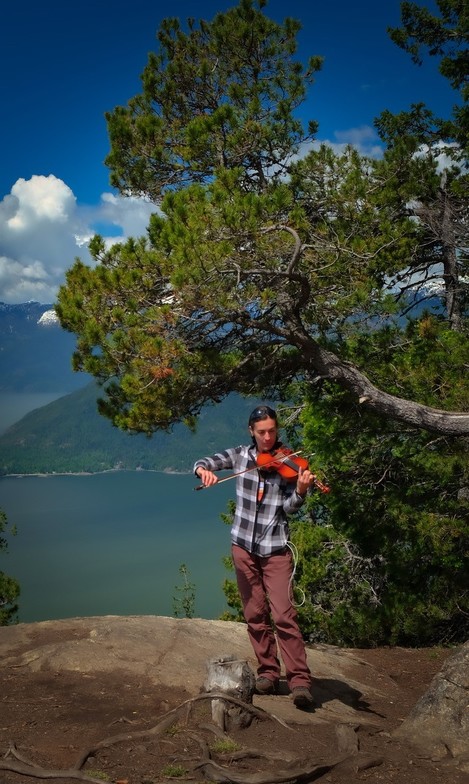 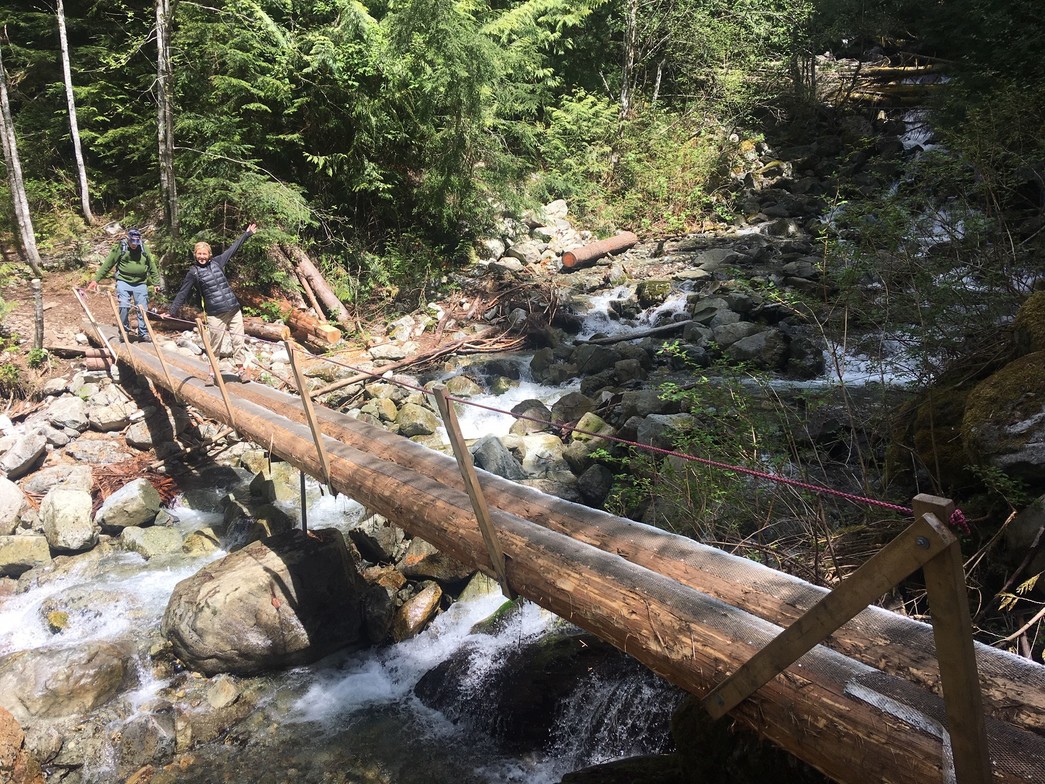 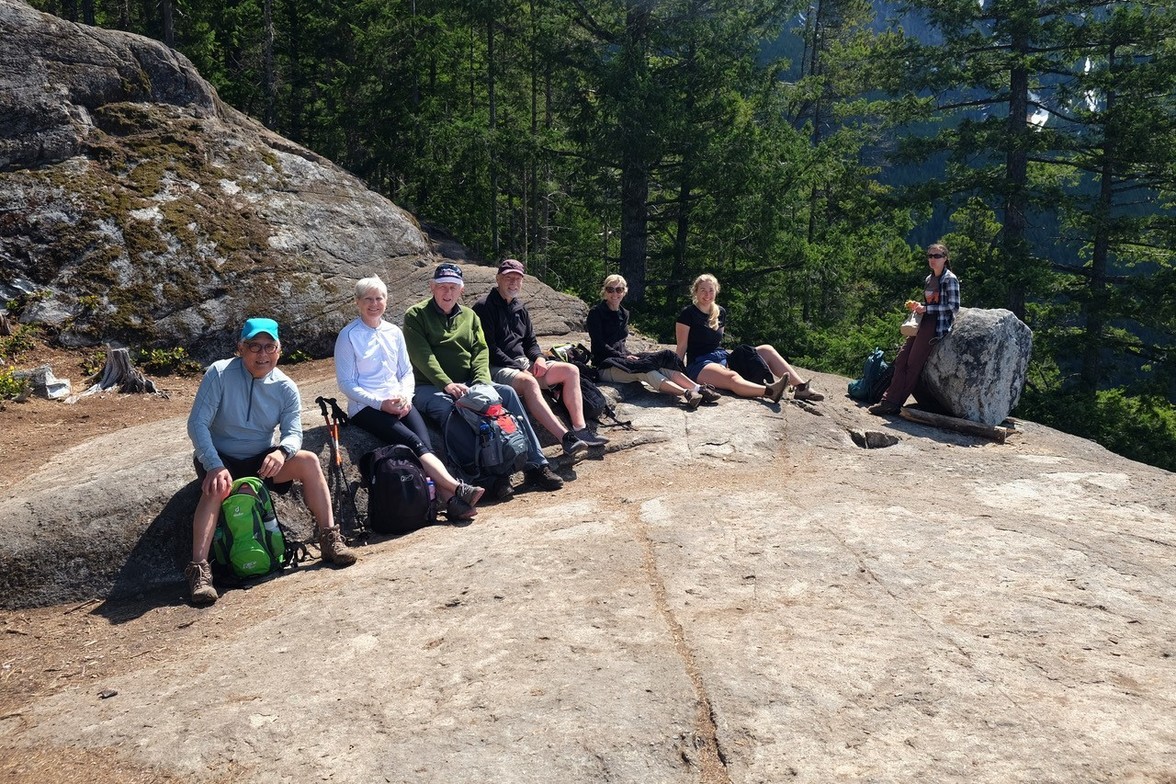 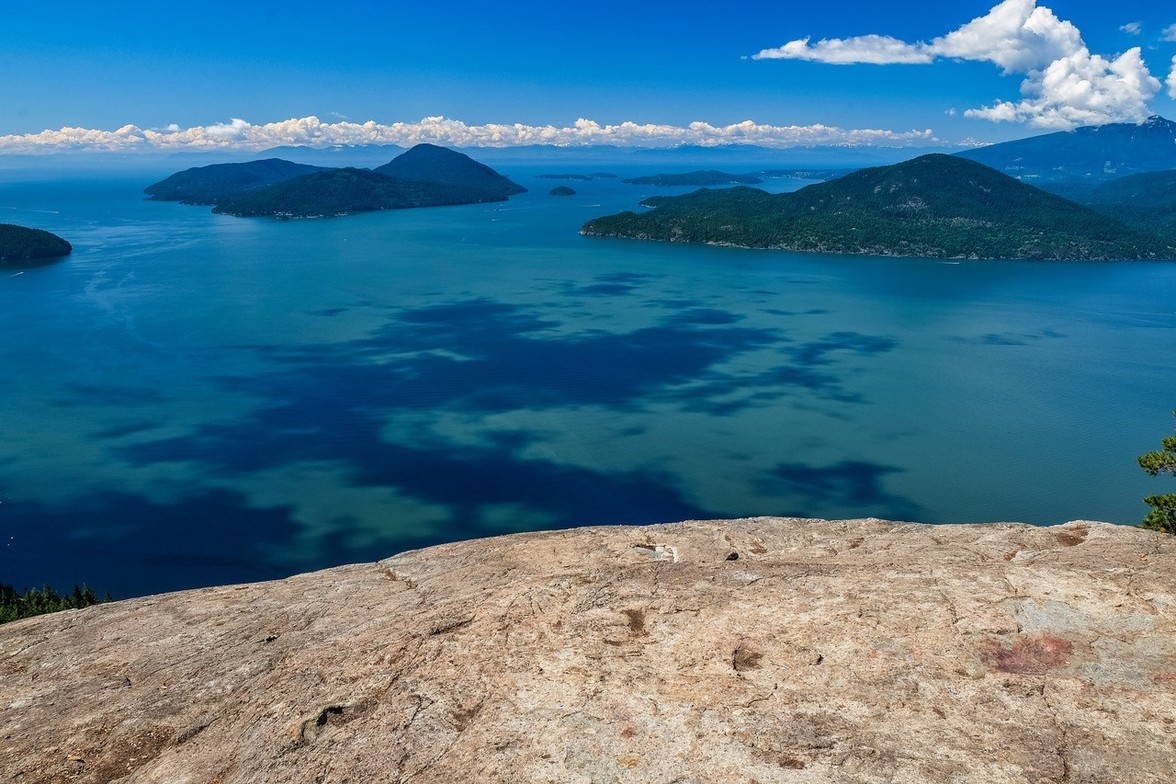 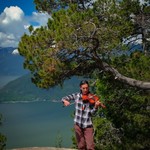 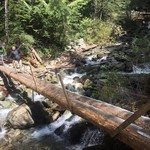 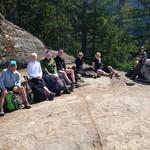 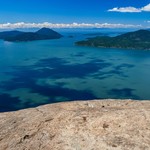 Whomp, whomp, whomp. A low, vibrating sound emanated from the bushes above us.

Alvin said to Emily, “Do you hear the bear?” With frightened excitement in her eyes, she squealed, “Is it really a bear!?” I thought to myself, ‘I only hear a grouse,’ but then quickly caught on and replied, “Of course, that’s the sound bears make in the spring when they’re really hungry!”

A couple of minutes later, Kim caught up to us and whispered breathlessly, “Do you hear the bear?” I couldn’t contain myself, and asked her if that was her and Alvin’s long-time joke. She looked at me seriously and said she’s always believed that sound to be a bear call because a long time ago, someone told her it was a bear… she scratched her head while trying to remember who that might have been.

“Well obviously it was Alvin, and he’s had you fooled for years!” I laughed.

Shortly after that, we emerged on the bedrock outcrop overlooking Howe Sound and the Sunshine Coast, with warm sun and the ocean below patterned by the shadows of cotton batten clouds.

Our group consisted of Kim, Alvin, their niece Emily, Cathy, Bruce, Nairn, Gordon and myself. There were only a few other people, but once we had a bite to eat, Kim and Nairn shouted, “So when are we going to hear you play that fiddle so we can all videotape you and post it online!?”

Just then, what felt like one hundred more people arrived at our lunch spot.

I thought to myself, ‘Oh goodness, I only carried the fiddle up to do a short plug for a mental health awareness webinar with 15 seconds of fiddle music to spice up my video clip.’  Surrounded by a swarm of paparazzi, I had to work up the courage to get started (more so for my mental health plug than for my fiddle playing, as I usually require a full face helmet and a bubble wrap suit for public speaking, to protect myself upon impact after fainting).

During the first attempt, my fingers got tangled in the cold and biting air and I shouted, “My fingers are too frozen!” But, with big thanks to Gordon for filming and Kim for holding my script, we finally managed to finagle around the masses and get a good shot. With our stomachs replenished, legs rested, and music in our hearts, we embarked on the journey down – just to hear crashing in the bushes above us! Ok now that wasn’t a grouse.

No, it was Alvin again, throwing boulders into the bushes and claiming that it was the bear. After some more trail-side fiddling, we waved goodbye, looking forward to our next hiking adventure!    And for those curious about the mental health plug we filmed up there, the link will be posted next week.