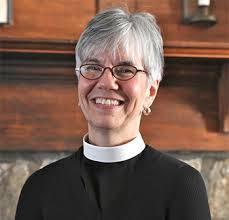 History was made at Christ Church Cathedral Vancouver when 300 delegates to a special Synod on Saturday, November 30, 2013, elected the first woman to be bishop of the Diocese of New Westminster and the first diocesan bishop in the province. On the third ballot, around 2:20 p.m. Archbishop John Privett, Metropolitan of the Ecclesiastical Province of British Columbia and Yukon, Anglican Church of Canada, announced that the Reverend Canon Melissa M. Skelton was elected the 9th Bishop of the Diocese of New Westminster, succeeding Bishop Michael Ingham who retired August 31st, 2013, after 20 years as the spiritual leader of Anglicans in this diocese.

The election began at 10:45 am with two ballots before a lunch break. Canon Skelton was one of 8 candidates, 4 women and 4 men. The Synod that elected her is composed of elected representatives from the 68 parishes of the diocese, eligible clergy and members of the Diocesan Council. Canon Skelton received a substantial majority of votes from both the clergy and lay members of Synod on all three ballots.

Women have been bishops in the Anglican Church of Canada for 20 years. It was on November 19th, 1993, that the first woman was elected Bishop, the Right Reverend Victoria Matthews was elected suffragan bishop of the Diocese of Toronto (a suffragan bishop assists a metropolitan or diocesan bishop). Bishop Matthews was later elected the first diocesan bishop in the Anglican Church of Canada when the Diocese of Edmonton elected her Bishop in 1997.

Archbishop John Privett announces the results of the third ballot

The Ordination and Installation of Canon Skelton as the 9th Bishop of the Diocese of New Westminster is scheduled for St. David’s Day, March 1st, 2104, with location yet to be determined. Bishop Michael Ingham’s ordination took place at St. Andrew’s – Wesley United Church on January 9th, 1994, he was installed as Bishop in the diocesan cathedral, Christ Church Vancouver.

Currently, Canon Skelton is Canon for Congregational Development and Leadership; and Rector, St. Paul's Episcopal Church, Seattle in the Diocese of Olympia (The Episcopal Church [TEC])

Bishop-elect Canon Melissa Skelton smiles as she is welcomed by Synod, November 30th, 2013

Background on Women in the Episcopacy in the Anglican Communion

The Anglican Church of Canada is one of the 39 Provinces of the world wide Anglican Communion comprising some 80 million members in 165 countries under the guidance and leadership of the Archbishop of Canterbury, the Most Reverend Justin Welby. In the Anglican Church there is no single entity with universal authority as each national and regional church has full autonomy.  In the Anglican Communion the first woman bishop elected was the Rt Reverend Barbara Harris ordained suffragan bishop of Massachusetts in February of 1989, and the first and only current Primate (principal presiding bishop of a Province) is the Most Reverend Katharine Jefferts Schori elected Presiding Bishop and Primate of the Episcopal Church in the United States beginning her 9 year term November 3rd, 2006.

Currently, six Anglican provinces have elected and consecrated women as bishops but there are 12 more provinces that have passed legislation to ordain women as bishops, of the 12, some have elected but not consecrated women bishops. On the third and final day of its meeting in London the General Synod of the Church of England in November 2013 voted in favour of a plan to ordain women bishops with an overwhelming majority of 378 to eight, with 25 abstentions; final consideration of this will be in 2014.