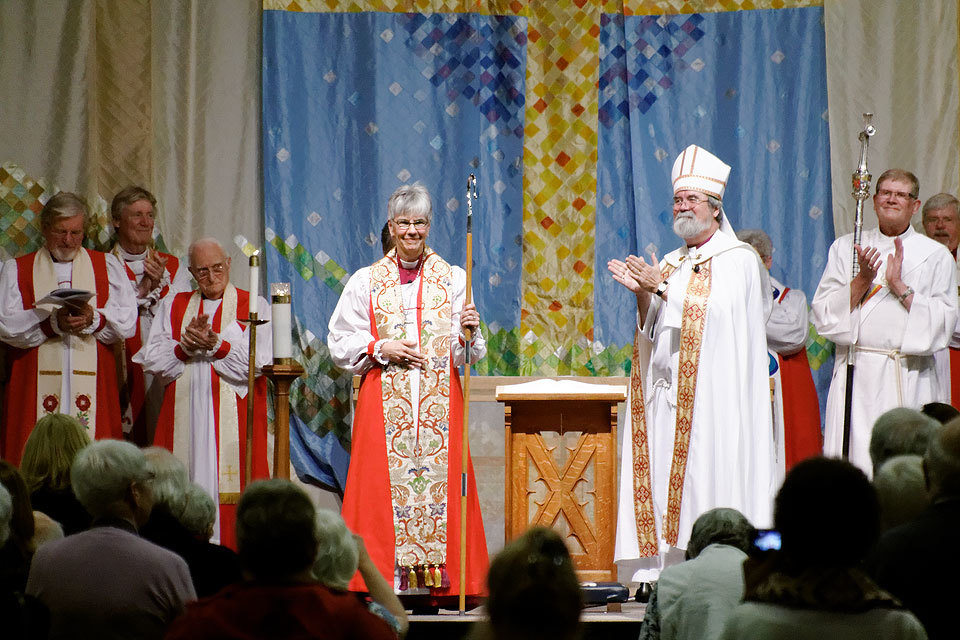 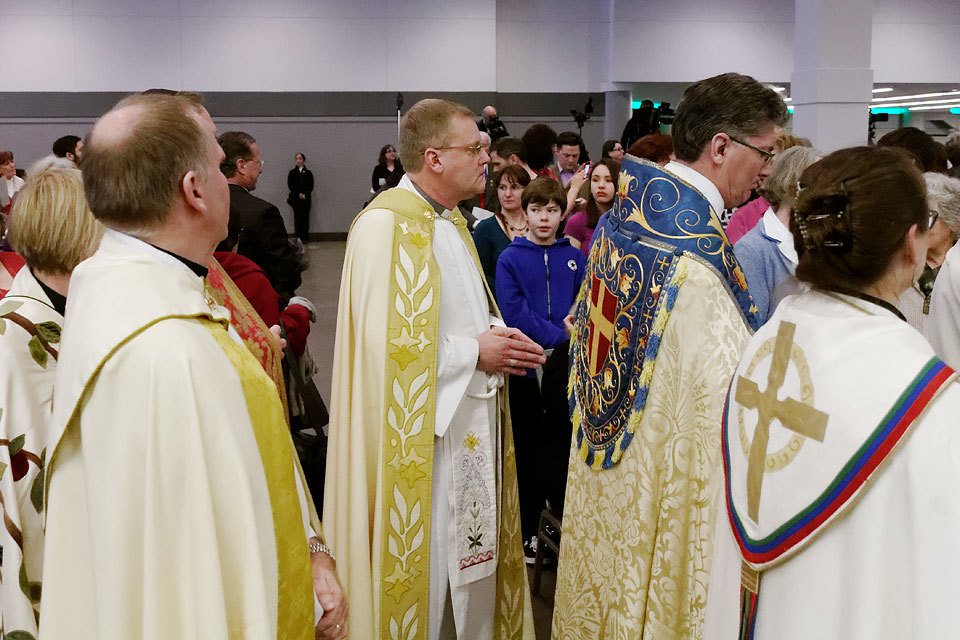 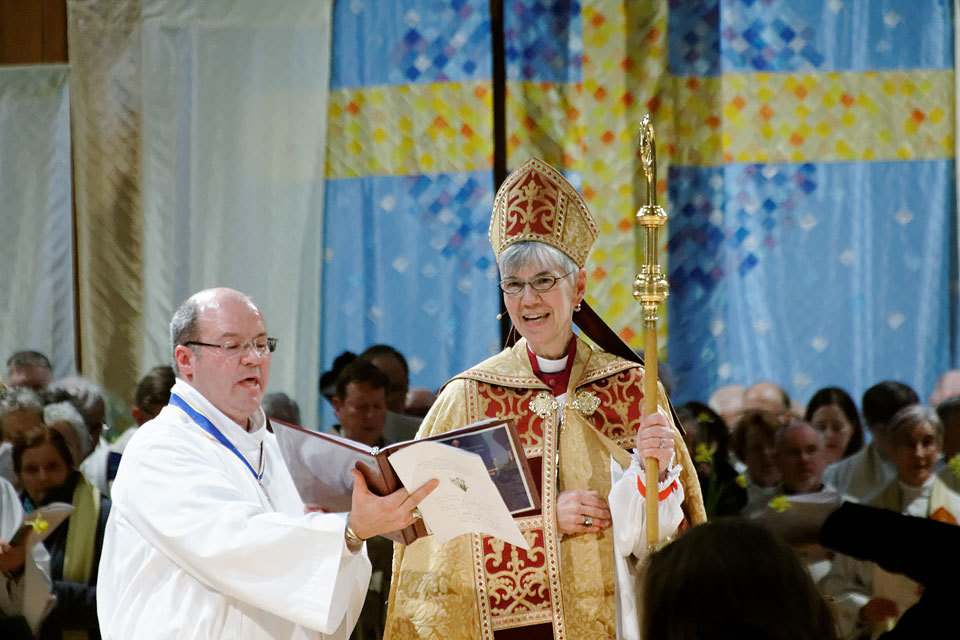 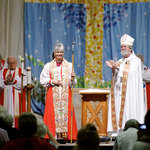 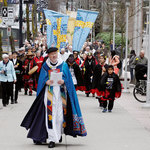 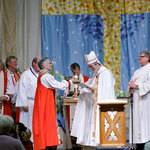 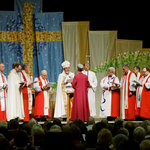 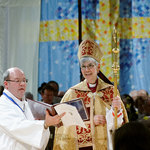 “More than 1100 attended the two hour Ordination Eucharist service which included a sermon preached by the Right Reverend Greg Rickel, the Bishop of the Episcopal Diocese of Olympia; inspiring music under the direction of Brigid Coult of St. Mary's, Kerrisdale and Rupert Lang of Christ Church Cathedral and beautiful liturgical decorations consisting of banners designed and constructed by Thomas Roach, assisted by Sheila Wex and Janet MacKinnon.

Following the Eucharist, presided over by the Primate of the Anglican Church of Canada, Archbishop Fred Hiltz, the majority of the congregation of Clergy, Lay and Ecumenical and Multi-Faith guests processed south on Burrard street to Christ Church Cathedral where Bishop Melissa was installed as the 9th Bishop of New Westminster. A feature of the Installation was the handing over of the Crosier of the Diocese of New Westminster (Pastoral Staff) by former Bishop, the Right Reverend Michael Ingham to Bishop Melissa.”

Many of you will know the Convention Centre – it’s a big space – had to be there early as St Catherine’s was involved in one of the 16 Eucharistic stations.  But entering there were chairs arranged beautifully – the choir were singing – Peggy & Sue there – choir of about 65, plus musicians – an enormous screen – and stage /platform with amazing banners at back with wonderful design – daffodils everywhere – given by St David’s Delta – for whom we pray in our intercessions today. Cameras, sound, various groups rehearsing – an atmosphere of anticipation and excitement.

By 12.30 we were robed and gathered in the corridor for the procession – there were banners flying; interfaith representatives & ecumenical representatives; visiting bishops – quite a lot! Postulants, Deacons from our Diocese, the wider Church & of course from Olympia Diocese and the Episcopal Church – Priests the same – Regional deans – Archdeacons, the Dean, the Bishop elect, simply robed in a purple cassock ; Bishops Michael & Douglas; Bishops of Province; Legal folk; the liturgical party; Our Primate Fred – who we pray for every week – head of the Anglican Church of Canada – and finally the Metropolitan John  -  quite a few hundred of us. The music started!

We began with Peter Elliott’s introduction & an elder, a woman from the Musqueum tribe welcomed us to the unceded aboriginal territory. One story she spoke touched me – She said looking at the world with all its muddle and disease – we might think God must be very disappointed with us – and we might ask God to send someone to make things right & better – and God would reply “I have sent someone, I have sent you!”  We are all called to be something, to make a mark, to live for the good of creation and each other. The elder of course noted that today Melissa was the person we welcomed from God as the one sent. It was very moving.

The service then followed pattern from prayer book for the Ordination of a Bishop. The Metropolitan was the leader of this part of the service as the head of our Ecclesiastical Province, ( B.C. & the Yukon).

We began by being reminded of our baptismal promises and we were sprinkled with water; through baptism we share the ministry of Christ.

The Scriptures were read in Japanese; Mandarin & English – three languages used in different congregations in the diocese. The sermon was given by Bishop Greg Rickel – from the Diocese of Olympia, Melissa’s Diocese . He’s from down south and has a wonderful sense of humour, yet a deep sense of God. His words were funny, touching, profound and encouraging. One point he made was, that there are 2 types of bishops, one who just likes being a bishop and one who likes following Jesus Christ. Melissa he said was the later. He ended by inviting Melissa on to the stage with him as he gave his final words of praise and hope as we journey forward.

The actual Ordination followed with some legal words and some testimonials and declarations were read. We then gave our resounding assent to the Archbishop.

The examination was quite touching. All the bishops present, about 11, were on the stage and different people asked Melissa a question, including Douglas Hambidge and of course Michael.

Melissa then led us in the baptismal covenant. More intercessions were sung and a hymn.

There followed the Laying on of hands by the Bishops gathered around her – with prayer. Melissa was then vested by Bishop Greg – the white robe, the rochet; the red chimere ; the stole; pectoral cross and Episcopal ring – Then Archbishop John gave her a bible & finally her pastoral staff.

All was beautifully carried out with dignity, tradition being important and yet with happiness. Clapping ensued as the building was filled with applause.

Fred our dear Primate presided at the Eucharist. Melissa stood with him & Archbishop John and our Diocesan Archdeacons.

More music followed with the choir and hand bells!

As this part of the ceremony drew to a close – we processed out of the centre led by the drummers and singers of the Nisga’a first nation, who have had for many years a strong association with the Anglican Church. What a way to go out - banners, clergy, many many lay folk.

We walked along the out side of the Convention centre, right and up Burrard street. It was quite a sight and caused much curiosity and puzzlement to the people around

We were all carrying daffodils, as I mentioned before, given by St David’s. It made a great sight! At the Cathedral we streamed inside, finding space where we could.

This short ceremony installed Bishop Melissa in her Cathedra – her seat. A hymn was sung lustily, then silence as we waited and waited and waited for the new Bishop to knock 3 times on the Cathedral door with the pastoral staff. It happened. How were they to know we were ready? Again a moving moment was when Michael handed over the Diocesan pastoral staff to Melissa.

The final hymn was Guide me O thou great Jehovah!

Refreshments followed and a chance to mingle and meet the new Bishop. It was a most memorable occasion. Let us give thanks for our new Bishop and pray for her as she joins us in ministry – in loving Jesus Christ and living this out in our daily lives.