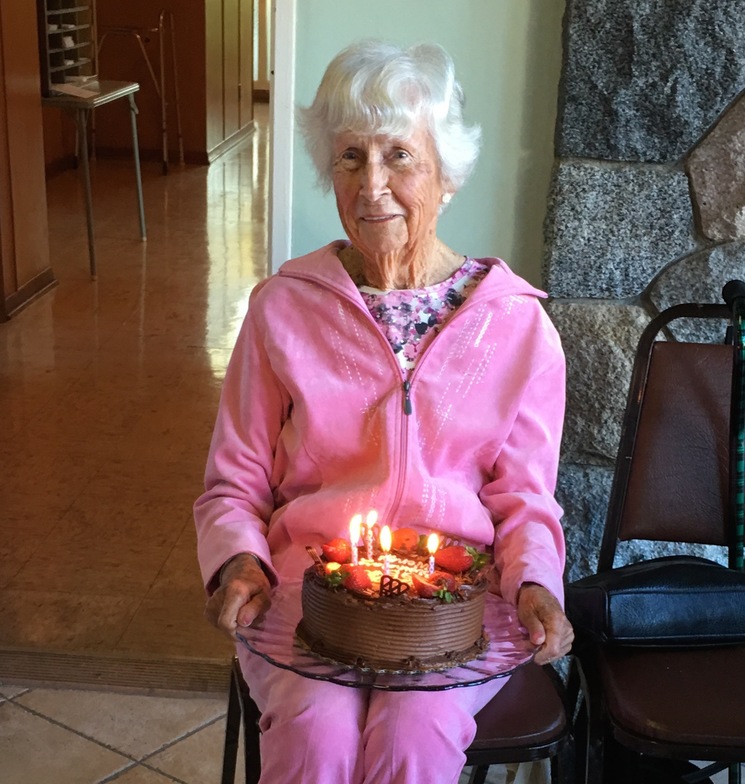 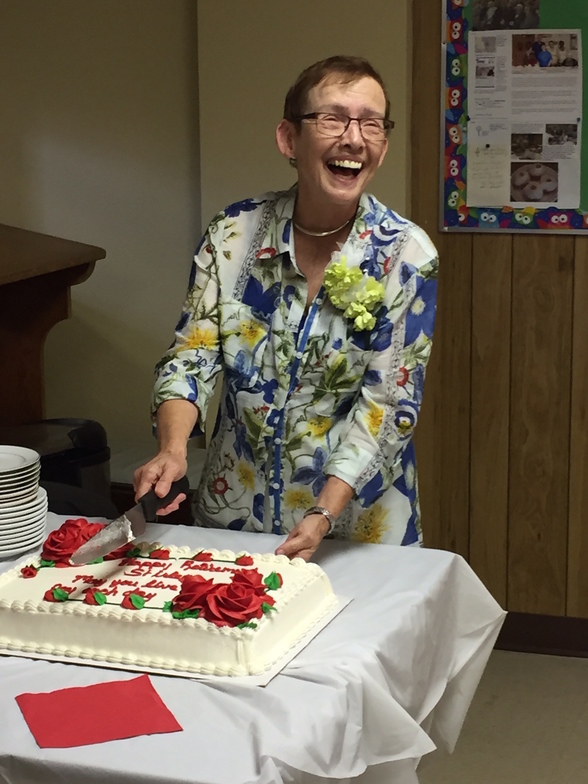 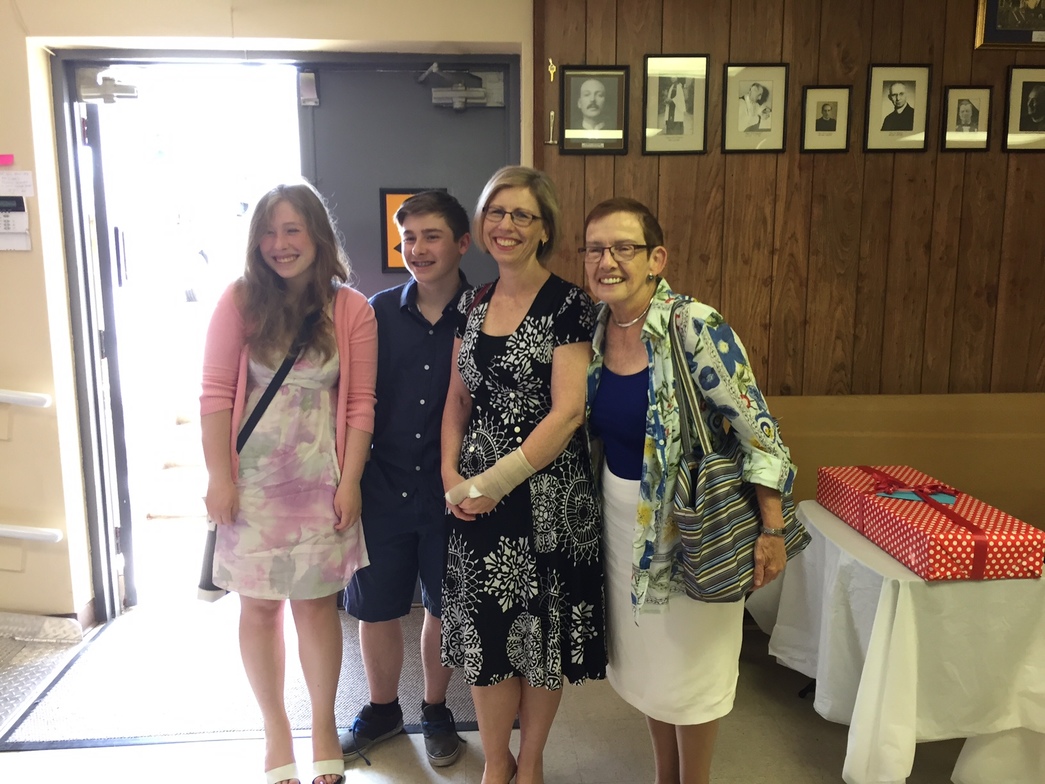 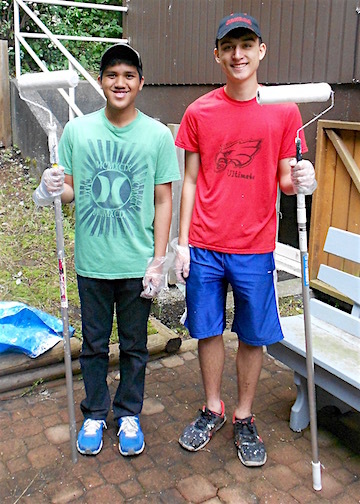 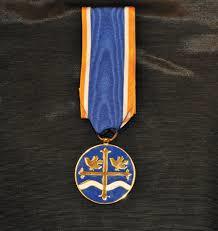 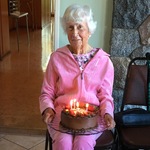 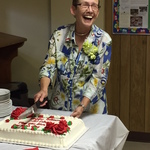 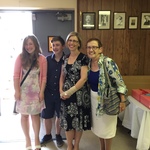 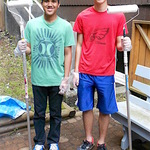 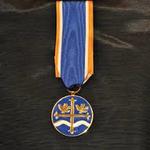 24 July, 2016
The 8 am Eucharist group celebrated a special birthday for Wendy Ingram after this morning's service with cake and bubbly!  Happy Birthday Wendy!
23 July, 2016
Rev. Shirley Stockdill celebrates retirement.
The parish of All Saints, Burnaby, hosted a retirement gathering to honour Rev. Shirley Stockdill who has been the interim priest with the congregation since September 2013.  Shirley was celebrated with song, poetry and reminiscences and was surrounded by friends and her family (Susanne with her children Natasha and Liam, and Stephen with his son Michael).
~~~~~~~~~~~~
18 July, 2016   LETTER FROM THE Rt. Rev. Melissa Skelton: Diocesan Consultation
Bishop Melissa has issued a post-General Synod 2016 letter concerning the change to the Marriage Canon and how our Diocese will proceed.  A link to the Bishop's statement is found below.
Bishop's statement on Diocesan Consultation
~~~~~~~~~~~~
15 July 2016  NOTICES:

Resolution AO51 passed after examination of the voting dataFollowing the July 11 vote and what appeared to be the rejection of the proposed amendment to the Marriage Canon of the Anglican Church of Canada by just one vote in the house of clergy, there was a flurry of statements released, social media posts and coverage by local, national and international news agencies. The proposed change to the marriage canon would allow that all persons who are eligible to be legally married in Canada may be married in the Anglican Church of Canada (there is still a conscience clause).

However, it was discovered on July 12 that the vote that was taken electronically was incorrect.

The glitch was that the General Secretary of the Anglican Church of Canada, the Venerable Michael Thompson who has a vote, was designated as a member of the laity not clergy. In order for a canonical change to pass, the resolution must receive a 2/3rds majority in all three levels: Bishops, Clergy and Lay at two successive General Synods (2016 and 2019).  Archdeacon Thompson's affirmative vote was tabulated in the wrong house. In the tabulation of votes, July 11 there were 51 Yes votes out of 77 clergy, one vote short of a 2/3rds majority, but there were in fact 52 votes out of 78 which is a 2/3rds majority.

Therefore, Resolution A051 has passed on first reading and will be presented for second reading to General Synod in 2019 when the governing body of the Anglican Church of Canada will meet here in the Diocese of New Westminster.

Posted by Randy Murray:  Website of the Diocese of New Westminster 12 July, 2016

Archibishop Fred Hiltz' statement of 14 July, 2016 is available on line at http://www.anglican.ca/news/forbearing-one-another-love/30016545/

COFFEE AND CONVERSATION: Tuesday, 19 July 10:30 am Mary Pellat Room   Come and join us!

Thrifty Foods is offering a shopping and home delivery service for customers unable to shop in-store.  Your order is taken by phone and then it is shopped and delivered the next day for a nominal fee of $5.00.

Anyone interested must register with Thrifty Foods' Customer Care line at 1-800-667-8280 or by email at sendial@thriftyfoods.com

Student Summer Workers: We welcome to St. Catherine's our Student Summer Workers, Tomo Ashby and Paul Oducayen. They began work on Monday, June 27th and will be with us until near the end of August. Both young me graduated from Grade 12 this year and are going to university in the Fall. This program is generously supported by Employment and Social Development Canada via the Canada Summer Jobs program.  We are grateful that the program has given us two positions this year.  Thus, we have not had to make a special appeal for Funds.   The Parish makes up the difference between minimum wage and their hourly wage. They are already involved in many tasks around the Parish which will enhance the fabric of the buildings. When you are at St. Catherine's during the week - please stop by and say hello to Tomo and Paul!

Order of the Diocese of New Westminster 2016

Bishop Melissa has confirmed that Mrs. Molly Koning is to be the St. Catherine's receipient of the Order of the Diocese of New Westminster this year.   This is a well-deserved honour for the lady who has managed the Altar Guild for many years.  Ginger Shaw will also be receiving the Order of the Diocese for her work as a member of the Cathedral Chapter.  Ginger is one of the Bishop's nominees. Congratulations Molly and Ginger!!

The awards will be presented at the Annual Service which will be held in the Massey Theatre, New Westminister on Saturday, 5 November starting at 10:30 am.   Mark your calendars!

Camp Artaban (Gambier Island)Camping has started!  Information about camps and possible financial support can be found at http://campartaban.com/summer/camper-registration/